Derek Davis and the Revolutionary Souls

Derek Davis and the Revolutionary Souls is a premier Soul/Funk/Rock party band.
All five members of this unique band have many years of recording, touring and performing.
Hailing from the San Francisco Bay Area the band consist of Derek Davis – Vocals, Kyle Bates – Guitar, Christopher Patton – Keyboards, DeLuca – Bass and Rob Rhodes – Drums.

Vocalist/front-man, Derek Davis is a former Arista Records Recording Artist signed by the legendary music mogul Clive Davis, with 11 record releases to his credit. A talented singer/performer and songwriter and a former Virgin Music/EMI songwriter and publisher, Derek has had many of his own songs covered by other artist’s and several of his songs have been placed in movies. He is the consummate showman and has done extensive tours across the U.S and Europe.

Kyle Bates was groomed by some of the finest guitar players from a young age.
He has played professionally on the west and east coasts for more than 20 years.
A signed artist and session player for many bands throughout the country including the MC Hammer label RWI. Kyle is also a guitar instructor with many students. He has also recorded on two of Derek Davis’s albums.

Christopher Patton comes from a large family line of musicians tracing his roots all the way back to one of the blues founding father’s, the great Charles Patton. He is an accomplished Piano/Keyboard player and singer. He is also an accomplished producer with many credits as well as leader of his own super charged ‘Charlie Patton Jazz Trio’.

DeLuca on Bass has played in many of the top bands in the bay area, such as the legendary party dance band BUST A GROOVE who he has played with since 1997.
His style is in the tradition of some of the most respected bass players of all time, such as Bootsy Collins, James Jamerson, Larry Graham, Louis Johnson, Mark Adams and Rocco Prestia. Jeff knows how to bring the funk down and knows over three hundred Soul/Funk/Rock and Jazz songs!

Rob Rhodes has over 25 years of playing and is one of the most sought after drummers around for recording and performing. He can play it all, Jazz, Rock, Soul, Latin, Blue’s, and Funk. Rob has played with more than 30 recognized major performers, such as Marry Wilson/Supremes, Ledisi, Robin Duhe/Maze, Joyce Cooling, The R&B All Stars, Shane Dwight and so many more.

Derek Davis and the Revolutionary Souls play Soul, Funk and Rock hits from the 60’s to today. They make the dance floor shake with electricity, always leaving the audience wanting more. The band is tight, explosive and extremely fun to watch. 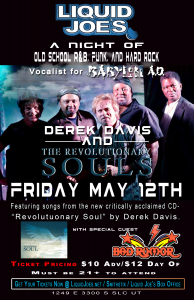